A sequence of words, often alliterative, difficult to articulate quickly. Tongue-twisters may rely on similar but distinct phonemes (e.g., s [s] and sh [ʃ]), unfamiliar constructs in loanwords, or other features of a language. The hardest tongue-twister in the English language according to Guinness World Records is supposedly 'The sixth sick sheikh's sixth sheep's sick'. 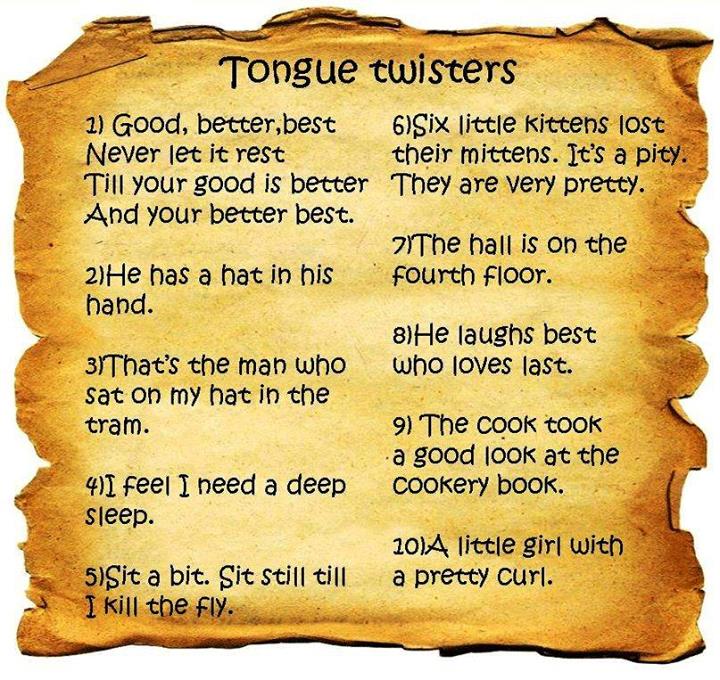 "Big whip" is another that is difficult for some people to say quickly, due to the lip movement required between the "g" and "wh" sounds. Some well-known English tongue-twisters are:

Billy blew a blue bubble while bouncing on a bongo.

"How much wood would a woodchuck chuck?":

and using the same format,

"How many cars can a carpark park?":

You've known me to light a night light on a light night like tonight.

Theophilus Thistle, the successful thistle sifter, was sifting a sieveful of unsifted thistles, when he swiftly thrust the thistle through the thick of his thumb.

has alliteration but is not a true tongue-twister because repeating the words would and chuck multiple times is not difficult to speak. In contrast, the following sentence:

is a tongue-twister because the letters f and p and the letters s and sh are interchanged in an unfamiliar sequence that is difficult to speak without practice. Some tongue-twisters are specifically designed to cause the inadvertent pronunciation of a swearword if the speaker stumbles verbally. An example of this sort:

Another variation on the "pheasant" theme:

A famous variation on the former used by Steve Martin in The Jerk where, amazed, Martin exclaims "Hey, I can now say:": I need not your needles, they're needless to me;
For kneading of noodles, 'twere needless, you see;
But did my neat knickers but need to be kneed,
I then should have need of your needles indeed.

When a twister a-twisting will twist him a twist,
For the twisting of his twist, he three twines doth intwist;
But if one of the twines of the twist do untwist,
The twine that untwisteth untwisteth the twist.

Untwirling the twine that untwisteth between,
He twirls, with his twister, the two in a twine;
Then twice having twisted the twines of the twine,
He twitcheth the twice he had twined in twain.

The twain that in twining before in the twine,
As twines were intwisted he now doth untwine;
Twist the twain inter-twisting a twine more between,
He, twirling his twister, makes a twist of the twine.