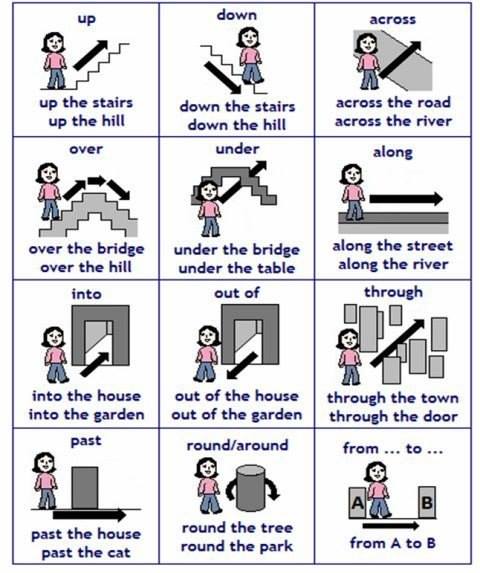 There is a lamp above the table

I saw a boy walking across the street

The boy hit the ball against the wall

They are running along the street

My house is standing among trees.

Kate is waiting at the bus stop

She is at school

My garage is behind the house

The cat is sitting below the table

We have a big garden beside the house

There is a sofa between the window and the wardrobe

She lives beyond the station

I want a table by the window

She is walking down the street

She comes from London

She lives in a beautiful house

in front of - przed

There is a car park in front of the cinema

The cat is inside the box

The cat jumped into the basket

I live near the church

There is a glass on the table

She jumped out of the window

Wait outside the shop, please

Can you see the bird over the bridge

They are running round the lake

You must go through the corridor

I go to London tomorrow.

Kate went towards this building

You must check under the sofa

He climbed up the ladder.

At, on and in are prepositions of place and show the position of people, places and things:

e.g. at the cinema on the wall in the shop

N.B. In English, at is not normally used with names of villages, towns and cities.

on + the directions: left/right/other side/nearside/far side: e.g. on the left.

on + the + parts of a ship: port side/ starboard side/bow/stern.

in + the + geographical regions: Auvergne, Lake District etc.. e.g. in the Alps.

in + the + rooms and places: kitchen, bedroom, foyer, auditorium etc.. e.g. in the bathroom.

A: In English, certain expressions are different, so must be learnt!

B: Some expressions are used without a/the, here are some common examples:

C: Both on and in can be used for types of transport and parts of the body:

On is used when the part of the body/type of transport is the most important detail.

In is used when position is the most important piece of information.

e.g. Peter travelled to London on the train. - type

John sat in the last carriage of the London train. - position

Joanna has a cut on her left arm. - part of the body

Ania has broken a bone in her wrist. - position in the body

D: At and in can be used with places which can contain large numbers of people: cinema, theatre, church, stadium etc..

At is used when the activity is the most important piece of information.

In is used when the place/position is the most important detail.

e.g. I will meet you for a meal at the usual restaurant.

Richard and Magda met in the foyer of the Royal Theatre.

E: Both at and to can be used with places:

At is used when there is no active movement in the phrase/sentence.

To is used when there is movement in the phrase/sentence

e.g. At school, there are forty teachers and four hundred pupils. - no movement

Marcin is cycling to London to visit his friends. - movement

F: Both at and to can follow certain verbs: the meaning of the verb is different in each case: to throw, run, shout.

Bill threw a stone at me. ( a hostile action: intending to hurt someone )

Maria ran to me. ( a friendly action )

Maria ran at me ( a hostile action: intending to attack )

Eric shouted to me. ( a friendly action )

Eric shouted at me ( a hostile action: intending to express anger )

G: The preposition by is often used with transport when the type of transport is very important: the common examples are: by aeroplane, bicycle, horse, car, ferry, horse, lorry, ship, train

e.g. The businessmen travelled to Africa by aeroplane and in Africa, they travelled by car.