Both chlorella and spirulina are microscopic plants that grow in fresh water. They're actually called micro-algae, since they are microscopic forms of algae. (For those sticklers out there, I'm using the term "algae" to mean both "alga" and "algae" throughout this text, ignoring the proper conventions for this term.) And they've been around for quite some time: a few billion years, actually. These are some of the earliest and simplest life forms on the planet, appearing way before animals roamed these lands. 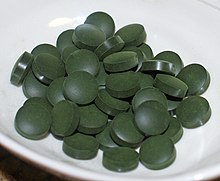 These micro-algae contain an astounding array of nutritional elements: vitamins, macrominerals, trace minerals, essential fatty acids, protein, nucleic acids (RNA and DNA), chlorophyll, and a vast spectrum of phytochemicals. They are thought to contain every nutrient required by the human body. Yes, you could literally live off these micro-algae. You wouldn't need to eat much, either, since they are so nutritionally dense.

The "micro" part of their name is no joke: these superfoods range in size from 2 to 8 microns, which is about the same size as a human blood cell. They appear green due to their chlorophyll content.

Harvesting them requires special centrifuge equipment, which is one reason why individuals don't grow their own micro-algae for consumption. You have to get it from commercial processors who grow these superfoods in vast water farms located in regions of the world where the climate permits (the closer to the equator, the better, since there's more sunlight).

If chlorella and spirulina were sold with "Nutrition Facts" labels, those labels would be impressive indeed: zero refined carbohydrates, high in digestible protein, high in essential fatty acids, no "bad" fats, high in chlorophyll, and so on. I'll list some of the known properties below. But it's also important to recognize that much of the healing phytochemical content in these superfoods is simply unknown. Scientists haven't isolated and named all the nutrients found in these plants. So it doesn't render a complete picture to just list all the vitamins and minerals found in powdered chlorella, for example. The vitamins and minerals that we know of are not the only ones that matter.

For example, in the early 1900's, doctors thought there were only four vitamins needed by the human body. Now we know of over a hundred vitamins, minerals, amino acids, and other substances that are necessary for optimum health. In the years ahead, we'll certainly find even more. And when we do, chances will be that they are already found in micro-algae. Of the nutritive substances we know about, however, here's what you find in chlorella and spirulina:

Looking at the nutrients it provides, a well-informed nutritionist can only stare in awe: these are many of the nutrients needed by every human body, in near-perfect ratios! It's almost as if Mother Nature herself reached down from the heavens and said, "Here's the perfect food for all human beings..." and gave us micro-algae. They're that impressive.

The only thing that's not impressive about these superfoods is their publicity: thanks to the fact that pharmaceutical companies can't profit from them, the true healing benefits of these superfoods are virtually unknown by Western medical professionals. As you'll see in the sections that follow, this is an extremely unfortunate situation, since the use of chlorella and spirulina in patients can not only prevent millions of cases of serious disease each year, it can actually reverse conditions like cancer. It can even be used as an adjunct “complementary" therapy to help those who choose the Western medicine route and allow themselves to be subjected to chemotherapy, for example.

But before we get into the medicinal uses, let's take a look at how it is being used around the world right now.