The Secret Language of Anorexia

It is one of the great paradoxes of the developed world that children starve themselves in the midst of plenty. Throughout Western society, doctors are seeing children as young as one and two years old who refuse to eat. 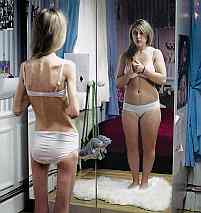 In a society that equates beauty with being thin, the pressure on young people - especially girls - is extreme and has often been blamed for the rise in anorexia. But is anorexia a disease in itself or simply a symptom of a more serious psychological condition?

Controversial Canadian therapist Peggy Claude-Pierre believes it is the latter. Claude-Pierre, who operates an eating-disorders clinic in Victoria, British Columbia, is the author of The Secret Language of Eating Disorders, a book that describes the dramatic story of how she successfully treated her two daughters for anorexia after doctors had told her the condition was incurable.

The author says anorexics are actually suffering from what she calls a "confirmed negativity condition". Put simply, they believe they do not deserve to live. When they come to her for counselling. she says, they will often comment that they don"t really need help, because there are many others who are more deserving.

A slight. attractive woman with curly blond hair, Claude-Pierre has a disarmingly warm personality. Told by her advisers to wear a long dress and to curtsy when she first met Princess Diana, Claude-Pierre instead wore jeans and gave the princess a big hug. Diana, perhaps the world"s best-known anorexic, was never one of Claude-Pierre"s patients, but before her death she had been planning to appear at a fund-raising event at Claude-Pierre"s Montreux Glinie last autumn.

Like Diana, whom Claude-Pierre describes as "the true anorexic profile", anorexic children are typically "humble. gentle and self-sacrificing". They are often highly intelligent and hypersensitive. "The parents are often brilliant people, professional people who care about their child, but the child is trying to parent them," Claude-Pierre told SPOTLIGHT. "Parents may fall into the trap of letting them [the children] be confidants. "Oh, yes, Mummy"s tired today, sweetheart. I"m just going to put my feet up for a little while..." - "OK, Mummy, I'll get your slippers. It's OK..." That kind of thing happens a lot."

Claude-Pierre says one reason for the problem is the trend towards the small, nuclear family rather than the extended family. In the past, she says, other members of the family would have helped parents deal with emotional, financial or health crises.

"But in nuclear families, children don't have that available to them, so that when Grandma is rushed to the hospital because she has asthma attacks and baby is put in the car all the time to go with her, never knowing whether Grandma is going to die or not, the child picks up that anxiety. Hę feels he has to look after everything, and by the time he's 13, he thinks he has to look after his younger sib-lings as well."

According to Claude-Pierre, such children are always worrying about the people in their lives. In extreme cases, the child takes this personal concern one step further and begins worrying about "the ozone layer, the whales and things like that. So his life becomes an impossibility of responsibility," she explains.

"The faster he runs, the better the grades he gets, the better he looks, the happier everybody will be, because he is satisfying the external values of the given society. he's not living for himself," she says. "he's thinking and living for society."

For such children, even positive messages can have a negative interpretation, according to Claude-Pierre. If the child"s mother tells her, "Darling, you look beautiful today," the child thinks, "Oh, God, I was ugly yesterday".

Following her successful treatment of her daughters and requests from doctors for help with anorexic patients who had not been cured by other forms of treatment, Claude-Pierre established the Montreux Counselling Centre in 1988, followed by the Montreux Clinic in 1993. The clinic operates on the principles of unconditional love, positive reinforcement and round-the-clock attention. The idea is to help the patients fight their negative sense of self, which many children experience as a voice that continually sends them negative messages "It's a crash course in living, if you want an analogy," explains Claude-Pierre. "As when you're dealing with an infant: you certainly don"t let him have full responsibility himself, because he's incapable of it. These people are emotion-al infants in their own minds." In short, the clinic helps its patients to grow up. By the time they reach what Claude-Pierre calls "the reality stage" or "adolescence", they are learning to think and act for themselves. "When the kid starts to say, "Oh, I disagree with you," that is so healthy," she comments.

In the final stage of treatment, the patient returns home, making three return visits to the clinic in the first year. Five years later, there is a final follow-up.

Such extensive personal treatment is clearly expensive, but just how expensive is something Claude-Pierre does not discuss in her book. She is reluctant to talk about it in person, too. When I asked her about it, she responded with a comment journalists love to hear: "That"s a really good question", and went on to say, "It's expensive on us," meaning herself and her staff.

Later she told me about a doctor who had already spent nearly a million dollars on treatment for his daughter before she came to Montreux. Hę spent another C$ 300,000 on his daughter at Montreux, "but she had incredible care - she was catatonic for almost five months," Claude-Pierre said.

One patient who did not live to experience the five-year checkup was 30-year-old Samantha Kendall of Birmingham, England, who died of liver failure in early November last year, two years after she left Montreux. Kendall, a former nightclub singer, began starving herself shortly after returning from an 18-month treatment program.

Claude-Pierre said she was "numbed" by Kendall"s death, telling The Guardian that Kendall "walked out without any counselling. She refused it. When she left, I wrote to her, saying: "Sam, you're not well. If you come back, you'll have to have counselling." I don"t think she was based in reality - she said she"d like to come back as a carer. Maybe she did't really want to admit she had a problem," the author said.

This was only the start of the bad news for Claude-Pierre. Later that month, the Montreux Clinic was placed under investigation by British Columbia provincial police and health authorities. There were accusations of financial irregularities and the mistreatment of patients through such practices as force-feeding.

Newspaper letter columns were filled with comments on the charges - most of them positive. Claude-Pierre was also defended by former anorexics. Kristie Latour of Campbell River, B.C., told the Vancouver Province that anorexics need restrictive treatment. Latour is grateful that her own parents insisted that she remain in a similar program at St. Paul's Hospital in Vancouver.

"I think of that every day. If they hadn"t done that, I probably wouldn"t be here," Latour said. "I hated everybody. I hated everything. I hated the system. I did't want help. My heart goes out to that woman. She's trying to help people who don"t want to be helped. and that"s incredibly difficult." Claude-Pierre denies all wrongdoing. She describes the accusations as a "nuisance effort" from a former employee and regrets that media reports have caused a "trauma" for several of her patients. She told SPOTLIGHT that staff members are disturbed by the media reports, which they feel "challenge their integrity. They feel compromised by this sort of reporting."

In spite of the criticism, Claude-Pierre continues to be flooded with requests from around the world to establish more clinics. She plans to open a teaching clinic in Maui nest year, where groups of 25 students will train in 13-week work and theory sessions. Hawaii was chosen partly because it is closer to Australia and Japan, but also because of its climate.

"We have gardens for the children in Victoria," she says. "They plant things, because I think It's important for them to understand the analogy of growth from seed. and I show them that they are going to grow like this, and It's magic. So, Maui can do that year round." Claude-Pierre says she hopes to open further clinics in the continental United States, the United Kingdom and western Europe.

Meanwhile, there"s a happy ending for her own daughters" struggle with anorexia. One daughter, Kirsten, has married and recently had a baby. The youngest daughter, Nicole, has fully recovered and works at the Montreux Clinic.

This article is very

This article is very interesting. Nowadays it is thin people cult...Many, especially young girls, want to be slim, beacuse everywhere it is modern...Unfortunately ;/