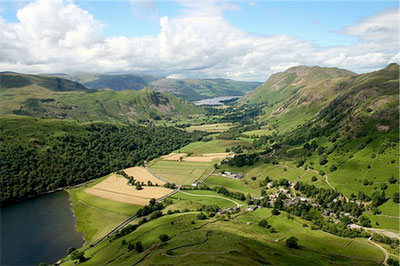 The Lake District is one of the most beautiful parts of northern England famous for its lakes and mountains as well as beautiful views. Most of the area belongs to the Lake District National Park visited by hikers and nature lovers all year round. Although the mountains in Lake District are not very high (the highest peak, Scafell Pike, is 978 metres high), their bare slopes, lakes perched in the valleys and austere crags are like a magnet for trekkers, walkers and photographers. Scaffell Pike is also the highest mountain in England.

The landscape of Lakeland has been shaped over many thousands of years. The place had not been popular until the early 19th century. Then a writer Wordsworth, born and brought up here, published ‘A Guide through the District of the Lakes’. In this book he mentioned that the area was capable of satisfying the most intense cravings for the tranquil and the lovely and the perfect to which man, the noblest of creatures, is subject.

You do not need to be an experienced climber to admire the views of long valleys, in which there are old, stony churches and houses as well as a great number of sheep. The most remarkable spots in the neighbourhood are: Windemere Lake streching 17 km from north to south, impressive and scenic Ullswater, oval Derwentwater, deep and mysterious Wastwater, Castlerigg Stone Circle and Great Langdale.

The coastal part of Lake District is also interesting and very beautiful. Here you will find deserted sandy beaches, small villages and steep slopes. The place is a paradise for bird watchers as there are plenty of different bird species in the area, including dunlins, godwits, oystercatchers, black-headed gulls, sandpipers and wild geese.